This instrumental CD belongs to "electronica" but you are invited to listen to it under the illusion that it is the recordings of an undefined animistic tribe's dances ...

Please wait while the audio tracks are being loaded.

It appears there are not any audio playlists available to play.

The track url currently being played either does not exist or is not linked correctly..

Update your browser to a recent version or update your Flash plugin. 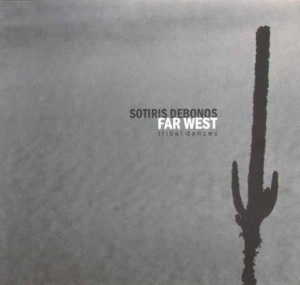 Sotiris Debonos was for many years under the persistency to produce some music with material motivated by the Ionian Musical School, which has no relation to the Eastern musical modes but follows purely the Western modes and aesthetics.

As he was listening, a certain morning, to the record “Codona .2” by Don Cherry, Collin Walcott and Nana Vasconcelos he had the idea of making a set of dances referring to a tribe, indefinable in space and time – thus came the subheading “tribal dances”.

The initial idea was the work to be purely acoustic; however,  Debonos decided together with the co-producer Antonis Livieratos to use Jazz loops in place of bass and percussion, so the  the material has an electronic direction.

The material took the title “FARWEST”, with reference to their common place of origin (Cephalonia – Ionian Islands), which happens to be the utmost western place of Greece, in both the geographical and the cultural terms.

Samples were used from mandolins recorded live in local taverns and from brass bands and choirs recorded in the streets, combined with processed loops.

Sotiris Debonos plays mandolin, synths and electric guitar and there is a contribution by Savinna Yannatou (vocalist of the well known group “Primavera in Salonico”) in the vocals.

The CD comprises 11 tracks, each having a dual title, for example the title “De Bossett Bridge – A Farewell Dance” –track 11– refers to an existing bridge at Farwest (Argostoli city in Cephalonia island) and also to the fact that this bridge is the usual passage of the dead when convoyed to their last rest…..

Such factual information, according to Sotiris Debonos, has no special interest to the listener, who is invited to listen to the CD at high volume under the illusion that it is a musicological recording of the dances of an undefined animistic tribe.

You have successfully subscribed to the newsletter

There was an error while trying to send your request. Please try again