Please wait while the audio tracks are being loaded.

It appears there are not any audio playlists available to play.

The track url currently being played either does not exist or is not linked correctly..

Update your browser to a recent version or update your Flash plugin.

THE POET…
Captain Montesantos A., was born for adventure and wandered in Pacific 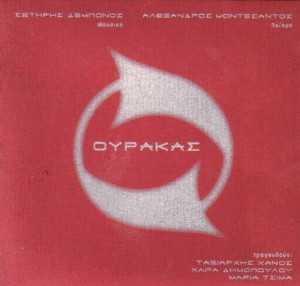 Ocean and took the baptism Captain – Phantom “. He died in 1965 in “Dafni” Neurological Hospital of Athens, where the last 10 years of his life he wrote his two poetry collections October 28″ and ” Ouracas”.

It never deserved to see them published, just he offered them to his friends or visitors to the hospital as handwritten poems.
Many of them are probably been lost forever…

His few partnerships with the press (local Athens and radio programs) classified him as the “poet of long sea voyages” (History of Greek Modern Literature, 1985).

…AND THE MUSIC
The music material consists of eight songs and three instrumental,two of which are adaptations of traditional dances of Kefalonia –Cephalonia- Ionian island, where Montesantos was born (and Debonos also…).
With small musical bridges between the songs the whole project sounds like a complete musical story. The melodic lines together with jazz improvisation elements and tapes, give a strong voice to the poet and an atmosphere of adventure to the listener.

In the booklet are included poet’s manuscripts, a comment of the psychiatrist Mario Markides who met the poet at the beggining of his career, a glossary of nautical terms and map – guide to the listener.

You have successfully subscribed to the newsletter

There was an error while trying to send your request. Please try again